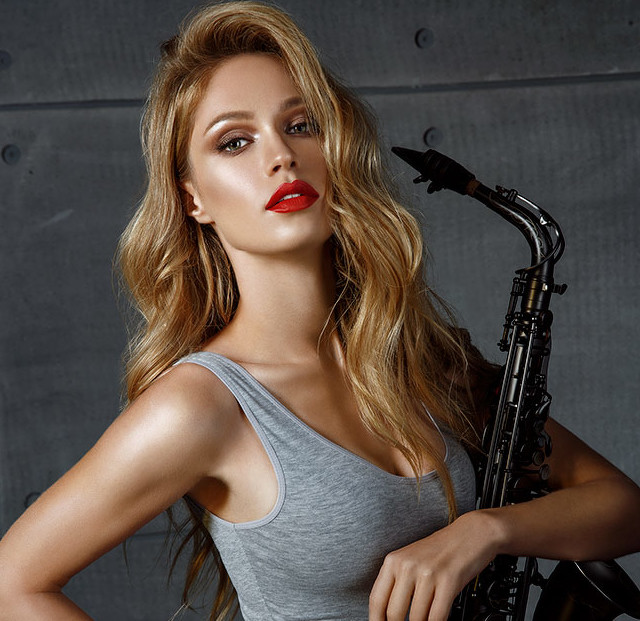 Anastasia McQueen is a young Belarusian music and businesswoman who, from Ibiza, is triumphing all over the world. Her quest for perfection, whether working in banking or sounding her magical ‘saxophone’, has led her to success.

Always accompanied by her inseparable saxophone, Anastasia McQueen has performed in more than 30 countries. Specialized in putting live music in the sessions of some of the most famous DJs, also acts in events of firms such as Cartier or Zara. Thanks to her longing for perfection, she has become the most demanded female saxophonist in the world. We talked with her to know how she has become a benchmark of the Ibiza night from places like Pacha, Nikki Beach, Blue Marlin, Privilege or Lio, as well as in the brand new ambassador of Ibiza Luxury Destination (ILD), the luxury club of the island. “For me it is an honor to be, I think that good Ibiza energy must be transmitted throughout the world. I think you can do many wonderful things on the island, always taking care of it and protecting it, ”he explains.

Anastasia Zhukovskaya, her maiden name, was born in Borisov, Belarus, 29 years ago. Since I was little I always had a lot of energy, so I went to gym classes, to karate… “I always wanted to do new things. With 10 years, I told my parents that I wanted to learn to play the guitar and they took me to the Conservatory, ”he recalls. There they were given bad news, the guitar seats were over. They proposed other instruments. “Because of causality, a teacher who knew my parents passed by and said‘ why don’t you sign up for saxophone? ”I didn’t want to, just because of the name (laughs), it sounded fatal to me. I thought the children were going to laugh at me, so I spent the night crying, ”he explains. But in the end her father convinced her and they made a deal: she would go to the first class alone. “When I arrived and I saw that instrument so beautiful, golden and bright it was love at first sight, since then I am in love with the saxophone and I have not stopped playing it for a single day,” he acknowledges. So he continued to go to saxophone classes but also, while he continued his studies, he did the Music career and ended up getting the orchestra conductor diploma, although he points out that he has never worked on it and does not believe he does. Little Anastasia didn’t stop for a second. “I think that my childhood was more difficult than the life of a child in Spain. I left every day very early from home, took many buses to get to everything and returned very late, almost without time to finish the duties of ‘cole’. But I had friends, my family who loved me very much and was very happy, ”he says.

When Music ended, she moved to the capital of Belarus, Minsk, where she got a job at a bank and became the youngest administrator of the company. “My job there was to manage many small but important things, from bank cards to informing people. To learn more, I decided to combine it with studying Economics at the University. And in my spare time I played the sax at events and discos, ”says this unstoppable woman. “What interested me most was learning marketing and branding. I have always thought that you have to be prepared for everything in this life. The music is very good, but you also have to know about business, because without them the other doesn’t work, ”he explains about his vital philosophy. In addition, from the age of 18 he began working as a model to take photos for advertising, something that he has never stopped doing but always in a secondary way. “I have it as a hobby, I like it and I have a good time, but I don’t see it as my main job. First of all I am a saxophone player, ”he explains. Therefore, although he liked work, as soon as he saw that with music he could make a living he decided to leave the bank, which had served him to have stability and pay for his career. She considers that she began to succeed because she always seeks perfection and that translates into always giving her best. “I try to make everything perfect. Dressing perfect, that the songs for each event are perfect, playing at the highest level … As I worked so hard, each couple came out of each event. That is geometric progression, ”he says.

Soon, Anastasia began to travel all over the world. He has visited more than 30 countries: United States, Spain, India, Brazil, Russia, China, Azerbaijan, Italy, Switzerland, Dubai, Qatar, Armenia … But of all of them there was a place that stole his heart so much that he decided to turn it into Your home: Ibiza. “I spent so much time traveling that I no longer knew where I was or where I lived,” he explains, “but when I arrived in Ibiza I knew that I had found my place, it is a window to the world, a mixture of everything and an international place where it is easy Collaborate with people from all over the world. There’s everything here. Also, here I met the love of my life, ”he explains. It refers to the flyboard athlete Lindsay McQueen, with whom he shares life, business and dreams. “When he told me his last name, I knew it was perfect to become my stage name,” he laughs. Thus, he changed the Zhukouskya to McQueen, his married last name, the name with which he is already known worldwide: Anastasia McQueen.

Anastasia does not lose contact with her home country, which she visits once a year, to see her family and her friends. “Although they prefer to come to see me in Ibiza, they love it,” he laughs and acknowledges that he is already fully established in Ibiza, where he has set up the sports and nautical toys company and events Q Ibiza, “we offer anything fun that can be do at sea ”, and stresses that they also have an ecological commitment, which in turn is very personal:“ As we are always at sea, we take the opportunity to collect any garbage or plastics and to raise awareness about the importance of posidonia, for example . We must look at the sea like our house and take care of it the same. There are tourists who come and do not feel like home, and throw a cigarette butt or bag. I always reproach them for their attitude and explain why you have to take care of this wonderful place. Ibiza and Formentera are two treasures that must be protected. ”

In Ibiza it can be seen and heard every Friday at the Vintage parties where it accompanies the sessions of Sebastian Gamboa, his favorite DJ. “We understand each other very well, for me it is one of the parties that best shows the spirit of Ibiza. Sebastian always makes a super nice music selection, ”he says. But he has also played with other electronic music stars such as Erik Morillo, Fonsi Nieto, Reboot or Jack E. See it live is spectacular, it flows with the music and makes the audience go crazy – literally – dancing. Normally he doesn’t even rehearse, he prefers to improvise on music. He recognizes that what he likes most are the live performances for the energy that is created. “I love feeling the joy of people. It is an exchange, they feel mine and they return it to me. Their vibrations reach me and a very strong current is created with them. There is nothing comparable, I feel like I have taken ten Red Bulls! ”, He explains. He also says that he also likes to act on television. In addition to Belarus and Russia, he has collaborated in El Hormiguero. “I had a great time with Pablo Motos and his team, they are very fun and creative. And we will propose more collaborations with them in the future, ”he says. “The sax is in fashion, you find it in great pop hits, in jazz or in electronic music. I think we take advantage of its beauty but you can do many more things with it, it is a very versatile instrument. I would like more time to collaborate. I would love to do something with Beyoncé! As a child I like the music she makes, the strength of her voice and the energy that her songs have, ”says this prodigious saxophonist who has fallen in love with the world. Who knows, if her unstoppable trajectory is maintained, we may see her accompanying Queen B.