Anastasia McQueen in the Ibiza Adlib

Anastasia McQueen in the Ibiza Adlib 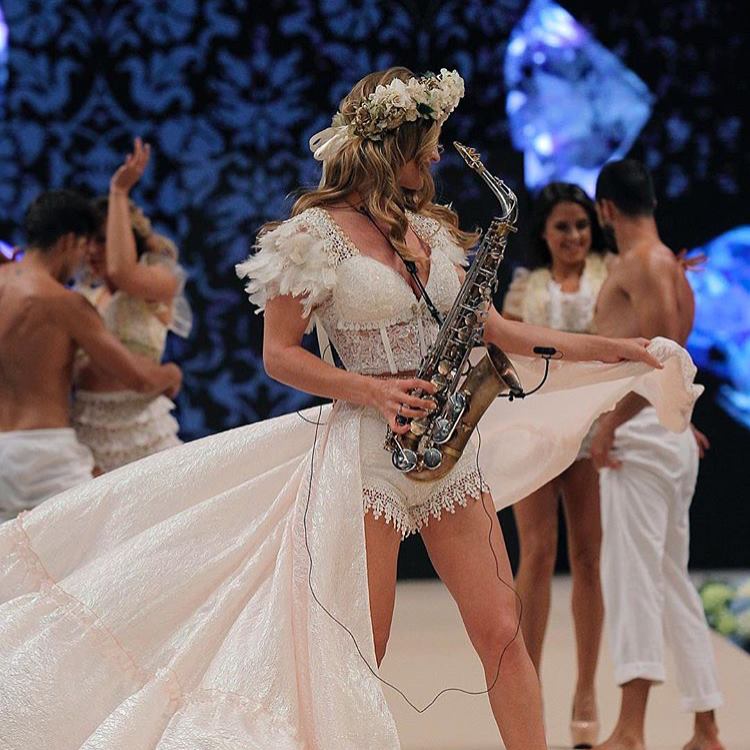 Model and saxophonist, Anastasia McQueen, has taken part in the Adlib fashion event in Ibiza on Friday, 19th May, giving a fantastic performance during the fashion show of the prestigious Spanish designer Virginia Vald.

The Adlib 2017 catwalk had a parade of promising newcomers, including some names that may be famous in a few years time. After this parade, called Future Adlib, there was another display by well-known designers.

A total of thirteen businesses showed their creations on the runway throughout Saturday, including Monika Maxim, Rebeca Rami and Ibiza Stones. The most important moment of the fashion show was at the end, when the designs of Virginia Vald were combined with the performance of Anastasia McQueen.

On Sunday, there were another fourteen parades presenting various collections, including Ivanna Mestres, Siempreprimavera and BSF Man. The galas were presented by the model and presenter Mar Saura and the documentary director Miguel Ángel Tobías.

Many celebrities were among the public and on the Adlib catwalk.

Among the famous faces was Cayetana Guillén Cuervo, the godmother of the event and a person very well connected to Ibiza. There were also many well known models including Felipe López and Clara Mas.

The atmosphere was guaranteed as this year was open to everyone. In order to ensure that people were comfortable, there was seating for two thousand.

Media such as Vogue, MTV and Elle covered the event and not only for Spanish editions, as there was also interest from the international press and numerous accredited fashion publications.

Anastasia not only gave a fantastic performance accompanied by dancers, she also wore a sexy pair of lacy white shorts together with a top that matched the ones worn by the dancers who accompanied her; she completed her look with a long, transparent skirt, all in Ibicenco white; Anastasia’s outfit included a garland of flowers.